Should I Use a Point and Shoot For Vlogging?

As we’ve said before, the camera is not the most important thing when it comes to vlogging. Every video that you create should focus on the story, with the equipment choice coming second. Things like drones and GoPro’s can be used to enhance the story, but an entire vlog should not be reliant on the camera equipment you think you need.

Point and Shoot cameras are a great way to get great quality video in a small, sometimes cheaper, package. I say “sometimes” because not all point and shoot cameras are cheap when compared to some of the entry model DSLR cameras, but again, you can start a vlog with whatever cameras you have available to you. Just because a camera is more expensive doesn’t mean that a video is going to be more interesting or entertaining.

Point and Shoot cameras might not give you the overall quality of a DSLR camera, but there are a lot of pros to using one when shooting your videos. The main pro of using a smaller camera is just that, it’s smaller. It’s lighter to carry around with you, you can fit it in your pocket if you don’t use some sort of tripod, and it’s not super cumbersome to travel with. These are the exact reasons why I prefer to shoot most of my videos using a combination of smaller sized cameras.

The cons to using a point and shoot camera are mainly in the reduced quality of the video. Since these cameras are smaller than DSLR’s, they rely on smaller sensors to capture your image. So while you will still get the HD quality you are looking for, it won’t have that nicer look and feel to it that you see from a fancier camera.

There is no reason why you must have an expensive camera in order to start vlogging. A cheaper point and shoot will work just fine for what you want to accomplish, but remember, you do pay for quality in the long run.

Which Point and Shoot Camera is the Best for Vlogging?

When it comes to choosing a point and shoot camera for vlogging, there are endless options out there. We tend to stick to brands that we prefer (Canon), but there are plenty of other brands out there that perform just as well, or better.

In addition to having a variety of cameras to choose from, there are also a lot of price points available. Unlike with the DSLR, we do have some options that we recommend that do not have the articulating LCD screen and this is mainly because of cost. We don’t feel it’s worth spending the money on a DSLR if you’re not going to get one of the features we recommend, but in this case we’re going for more affordable.

There are many more options than just the cameras that we’ve listed below, but these are some of our favorites that we use on a regular basis.

Our favorite compact camera, in general, is the Canon Powershot G7 X. It’s lightweight and extremely powerful for a point and shoot camera, not to mention it has our favorite feature, the articulating LCD screen.

This is a favorite across the board when it comes to popular vloggers on YouTube. Casey Neistat uses this camera as his secondary camera and Ben Brown used to use this camera exclusively until he moved over to using Sony cameras. It does come it close to the price of some of the lower end DSLR cameras, but we really love the fact that it can fit in your pocket yet still be reliable and provide good quality video.

We tend to shy away from Sony cameras in general, mainly because of personal preference, but the RX100 is a very popular point and shoot camera when it comes to quality. It’s got a large 1″ sensor that competes directly with the Canon G7 X. This is the camera that YouTuber Ben Brown currently uses.

The RX100 IV is a pretty pricey camera, but with the price comes 4K video, which none of the other point and shoot cameras mentioned here have. So if you’re looking to get into 4K video, this is a great option. And even though it doesn’t have the articulating LCD screen, this camera backs enough punch in other areas that we can still confidently recommend it. 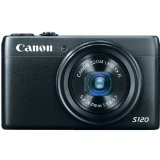 We are very aware that these are outdated cameras, but they still hold up as some of our favorite point and shoot cameras for video. We still keep the S120 in our regular arsenal whenever we are out and about. It’s super lightweight and compact, yet it feels solid when carrying it around. It doesn’t have the articulating LCD, but if you hold it at arms length you’re sure to capture yourself and everything around you.

The camera does not have a larger sensor like the Sony RX100 or the Canon G7 X, but the quality of the 1080P video looks great for the price. As I said, we absolutely love this camera and continue to use it to this day even though it’s already three years old.